Summer’s coming up. Look out for some great summer brands! Here’s a few we think you’d like:

Get yourself a pair of rainbows. You’ll need them for the beach! It’s a hot California day all the time in LA, and many stories have bneen told about the verstality of Rainbows. I’ve heard of people who’ve worn the same pair of rainbows for over 5 years! They’re a bit expensive, but try to get them anyways, and you’ll find a shoe that conforms to your feet perfectly (after the blisters).

These are the cool new Rainbows. They’re easier to walk in. They’re more sturdy. And more importantly, they are part of the Bohemian craze that has swept the UCLA campus. Pick em up. You won’t regret it.

H&M has basically everything and anything you need for really cheap prices. This is the time to buy something and experiment. H&M has shoes, backpacks, bags, shirts, pants. If anything, go to ’em for a nice t-shirt.

Summer’s almost here, and you know what that means! Everyone’s scrambling to get in shape fast. But wait. How do college students do it? With classes and jobs and internships and everything else in our busy lives, there’s not much time left for working out. Don’t give up though! Here’s 8 exercises that you can do right in your bedroom to get in shape and stay in shape for summer.

END_OF_DOCUMENT_TOKEN_TO_BE_REPLACED

So, you’re talking to all your friends, and they’re telling you about where they’re going next summer, fall, or maybe even winter. You’re bummed out that you found out about studying abroad late, and now you’re going to have sit around with FOMO until next year’s round, or so you thought. We want to point out that there are a variety of programs still available for spring ’15 and some year long ones available still too (you have until May 18th, 2015 to apply). Take a look at the link and check out each program to see what you’d be interested in. However, keep in mind that some of these programs require recommendation letters or long essays, so don’t procrastinate and try to complete the entire application last minute. To find out what sort of materials your program requires, create an account on UCEAP here and navigate to your program’s page.

END_OF_DOCUMENT_TOKEN_TO_BE_REPLACED

Are you in a summer rut? Here are some events around LA to check out in August! 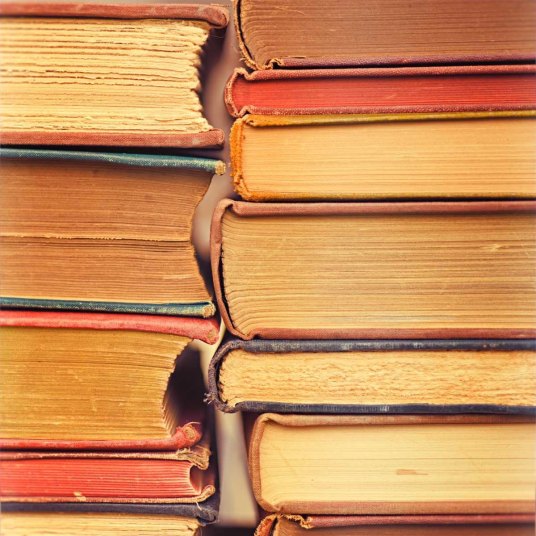 So school has been over for a month, and you know what that means, right? Time to read! (I know…sounds silly doesn’t it?) Anyway if you’re like me and actually do read for leisure, here are some life changing easy reads for summer:

1) War and Peace by Leo Tolstoy: this is a book that details events surrounding the French invasion of Russia and its impact on Tsarist society, as seen through the eyes of five aristocratic families. In short, it’s about ideologies on peace.

2) On the Road by Jack Kerouac: it’s a book based on the travels of Kerouac and friends across America. Considered a defining work of the counterculture era, this book is anything but boring. Its protagonists live against a backdrop of jazz, poetry, and love.

3) The Catcher in the Rye by JD Salinger: is a book about the journey of its young protagonist who has just been expelled from his private school. After a fight with his roommate, he leaves school to explore the grit that is New York City before returning home. It deals with issues of conformity, life, and death.

4) Slaughterhouse-Five by Kurt Vonnegut: This is one of my favorites. It’s a satirical novel about a young soldier, Billy Pilgrim, and his experiences in World War II. As he journeys through time, he must come to terms with the reality in which he exist.

During the summer music can be a huge part of taking the time you need to deters from the hard school year. Music festivals are a great way to enrich the breadth of music you listen to and hangout with friends at the same time. A few great festivals come to L.A. during the summer, check them out below:

1) Hard Summer Music Festival:: one of the biggest electronic music festivals of the summer. It takes place in South El Monte, CA. and this year will feature artists like Martin Garrix, A$AP Mob, Tiesto, and Disclosure. Here’s the link to the website for more info: http://www.hardfest.com

2) FYF Fest Music Festival: if you’re into indie music, this is the place to be. Taking place at L.A. Sports Arena, this music festival will feature dope bands like Phoenix, the Strokes, Interpol, and Jamie XX, to name a small few. Check out the link for more info: http://fyffest.com. Tickets go on sale May 22!

3) Bonnaroo: this is like the forefather of all music festivals, in my opinion. It includes artists for any listeners taste, from Elton John to Kanye West. And if that’s not your taste, try a little Zedd or Vampire Weekend. More info:http://www.bonnaroo.com. Little catch: it’s in Tennessee.

Hope this summer brings you a new way to listen to music!

For those of you staying in LA, here are some great things off campus you can do!

7PM every Tuesday. Get your laugh on!

You’ve heard of Getty and LACMA, but have you heard of Santa Monica Museum of Art? Go look at some great art for a date (or to make use whatever you learned in Art History class last quarter)!
by Jerry Cheung 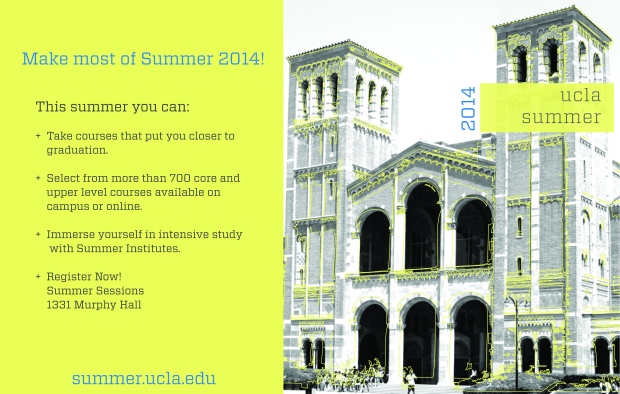 Are you staying in LA for the summer? Make good use of it by taking some awesome summer courses! Here’s a list of just some of the amazing classes UCLA is offering this summer: 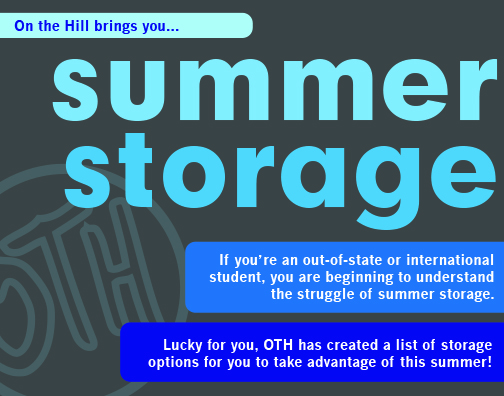 If you’re an out-of-state or international student, you are beginning to understand the struggle of summer storage.  Luckily for you, OTH has created a list of storage options for you to take advantage of this summer!

1. If you’re an international student, The Dashew Center has summer storage options available (although in our opinion, a bit pricey).  But there is a nice comfort in having UCLA look after all your valuables while you’re at home.  And they also have shipping options available if you wanted to send your stuff home for the summer.

2. For cheaper options, there is a public storage unit on Sawtelle and Olympic called Socal Self Storage that lots of UCLA students use for storage over the summer. UCLA students have recently came up with Bruin Bins, a service that will provide you with move-out boxes, pick up your items and store them away for the summer! Support a fellow Bruin.

3.  By far the easiest option, befriend someone from SoCal!  Why pay to have your stuff sit in a box when you can have a friend take it home and keep it there for free!  And considering the demographics of UCLA, you should be able to find a person who is from Southern California, no problem.

So summer is coming, and everyone here at OTH could not be more excited!  The beach, endless amounts of In N Out, not referring to your schedule in numbered weeks–and my personal favorite–making money from summer jobs!  But in order to get hired for an awesome summer job or internship, you should make sure your social media profiles are under control.  Here are some do’s and don’ts for your social media pages.

Talking to your friends:

Talking about your employer:

We know most of you already do these things, but look at this as a quick refresher course in common sense on the interwebs.

Welcome to On The Hill!

An Insider's Guide to ResLife